William McChesney Martin, the longest serving chairman of the Federal Reserve Bank, once famously quipped that the job of the Fed is to “take away the punch bowl just as the party gets going.” The Federal Reserve has served plenty of liquidity from the punch bowl since the credit markets froze up in the aftermath of the collapse of Lehman Brothers in 2008 and resulting financial crisis, which has been a leading factor in the recovery of our economy and fueled quite an M&A party in recent years.

After more than six years of near 0% interest rates, and anticipation that the economy will continue to stabilize, it may be possible that the party has become sufficiently festive — and that it’s time for the Federal Reserve to “put the punch bowl away,” with expectations building that a rise in interest rates may be on the horizon.

Overall, global and U.S. M&A activity was on the rise in the first quarter of 2015. The dollar volume of both global and U.S. M&A activity increased in the first quarter of 2015 over the comparable period in 2014 by 16% and 41%, respectively; the number of transactions fell in each category, but not materially. In fact, announced transaction volume in 2015’s first quarter was the highest total reported for a January 1 to March 31 time period since the last cyclical peak of 2007. 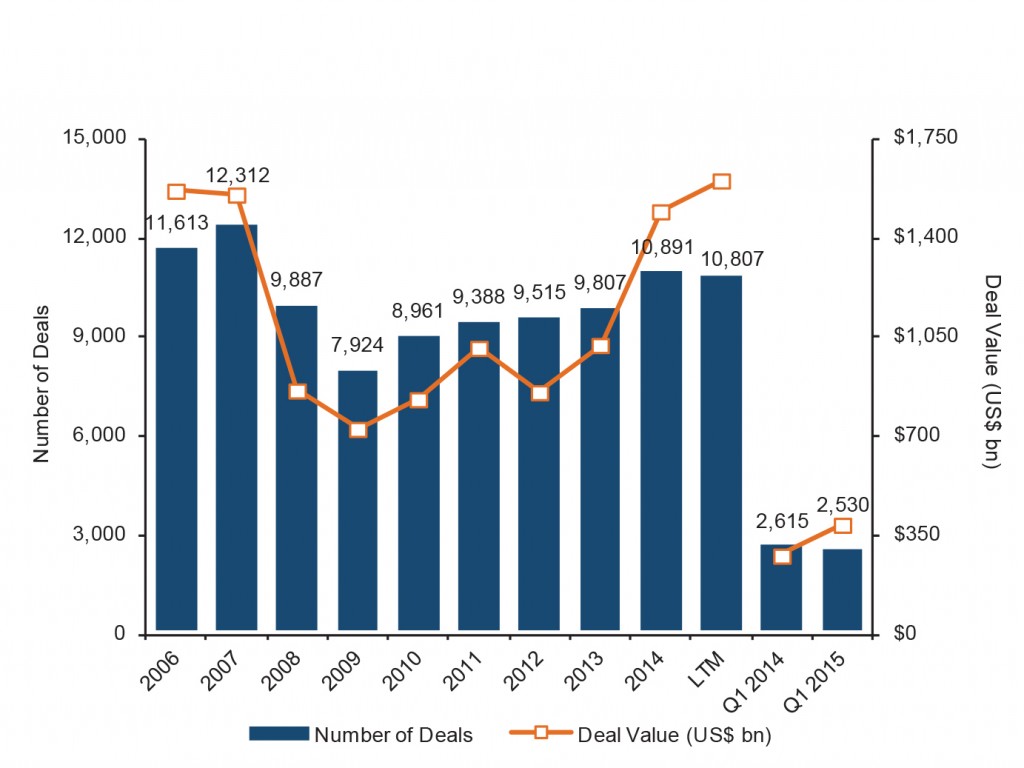 The technology, media and telecomm sector experienced an increase in volume and value of deals in the first quarter of 2015 compared to 2014, with a convergence of technologies and business opportunity producing a flood of revenue in cloud, mobile, data and analytics.<sup>2</sup> New technologies are enabling organizations to develop new business models, and in virtually all sectors of the global economy, companies are turning to technology targets to drive innovation and transform their business practices. The strategic decision to invest in technology is worthwhile; these assets drive a company’s speed to market and create a competitive edge for organizations.

The healthcare sector also experienced significant growth in transaction value during the first quarter this year, as compared to the same time period in 2014, with four announced mega-deals worth more than $10 billion.

Economic, regulatory, technological and consumer pressures have been causing the healthcare business environment to become increasingly more complex. As a result, health plans, providers, drug and device makers are reconsidering their business and growth strategies to gain new revenue or protect existing revenue, and to do so, are eyeing M&A.

The energy sector is another one that experienced growth in M&A, witnessing an increase of 47% in transaction value. With the crude prices nearly 60% below their previous highs, oil companies acquired numerous smaller strategic targets.

Buyout activity was strong in both the private equity and corporate sectors, with a surge in the first quarter of 2015 over the same period in 2014 by 27% and 48% in value, respectively; again, the number of transactions fell slightly.3

Pricing continued to rise as multiples expanded. Purchase price multiples for U.S. transactions, indicated by the ratio of enterprise value to EBITDA, increased to 13.1x in the first quarter of 2015, from 12.8x on a last 12-month basis through Q1 of 2015 and 12.5x for all of 2014. All of these multiples exceed the 11.6x multiple last seen in the halcyon days of M&A back in 2007.

Both the private equity (PE) and corporate sectors are poised for continued robust M&A activity. The amount of dry powder available for hunting M&A targets has continued to rise both in PE funds and in the corporate sector. PE firms had more than $1.3 trillion dollars at their disposal at the end of 2015’s first quarter to invest in acquisitions, while corporate players had approximately $1.4 trillion of cash balances potentially available for investment at the end of 2014. And, assuming a 40/60% mix of equity and debt, this $2.7 trillion of available cash theoretically could support a whopping $6.75 trillion of acquisitions.

Overall M&A activity continued its torrid pace in the first quarter of 2015, and potential buyers have plenty of idle cash to fund future acquisitions at a high level. A critical factor, however, will be whether credit remains plentiful on attractive terms.

While borrowers have begun to comply with regulatory concerns that dictate financial institutions should not incur debt financing that would result in pro forma leverage greater than 6x, it is too early to tell how significantly this cap may affect M&A activity in the long run. Because few middle market companies have displayed leverage above this benchmark even before the regulatory change, corporates typically have not financed acquisitions resulting in significant pro forma leverage. For large PE shops hunting for elephants, lower pro forma leverage generally translates into lower projected equity returns; in certain instances below acceptable hurdle rates, and — at the margin — lower M&A activity.

The issuance of leveraged loans has generally cooled since the third quarter of 2014, and this trend continued in the first quarter of 2015. While the par amount of leveraged loans outstanding continued its ascent to an all-time high at the end of Q1 2015 at $840 billion, the pace of new-issue first and second loan volume in 2015’s first quarter slowed substantially, down to $86 million from $168 billion, compared to the same time period last year.

While debt arrangers for large leveraged buyout (LBO) loans will continue to manage the new rules and regulations, which may have an impact on large transactions proposed by equity sponsors, it’s anticipated that credit will be increasingly accessed through alternative underwriters that provide attractive financing opportunities to borrowers.

Subject to potential exogenous shocks — such as geopolitical upheavals — leveraged finance conditions may remain relatively favorable for financing acquisitions, as well as dividends, for the foreseeable future, which will bode well for M&A activity during the balance of 2015.

With U.S. and global economies continuing to stabilize, interest rates are not expected to change materially in the near future, and any increases may not be substantial enough to impact serious consideration of M&A as a growth strategy among corporates or PE players, across industries.

For these reasons, the Federal Reserve may “leave the punch bowl out” until at least 2016. Let the M&A festivities go on.