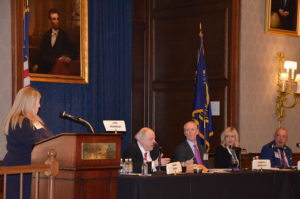 After returning to its regular spring scheduling, a cool morning gave way to a more temperate afternoon at the Philadelphia Union League as judicial, restructuring and turnaround professionals met for the 12th Annual Philadelphia Credit & Restructuring Summit.

The event kicked off with a networking luncheon and the traditional round of Jeopardy hosted by the Honorable Michael B. Kaplan. The judge seemed to enjoy his emcee duties as the Honorable Kevin J. Carey, Steve Mitnick of SM Law and Patrick Walsh of Cedar Croft Consulting all competed to answer questions on wide-ranging topics, from famous bankruptcies to Philadelphia sports teams to Greek mythology. Walsh walked away the ultimate winner with his own trophy.

The first session then moved away from competition and onto a more focused topic with “Cap Stack 2019 – What to Expect Throughout the Infrastructure.” Edward Philips of Eisner Amper moderated a panel that included Paul Schuldiner of Rosenthal Trade Capital, John Jadach of LBC Credit Partners and Randi Hershgordon of Context Business Lending. After providing an overview of the current state of the financial health of the country, including a breakdown on business loans and default rates, Philips then led a methodical discussion of what each panel member had experienced in their niche of the industry and what could be expected in the coming year.

Our survey also demonstrated that middle-market companies are looking to banks themselves to provide technologies that offer new, more effective ways to manage their finances. The survey showed that nearly 70% of middle-market companies are already using new digital technologies for billing, transfers and accounting, and they are especially enthusiastic about digital and mobile payment technologies that add an additional level of convenience, control, and insight to their payment systems.

More than ever, middle-market firms want a financial partner that can deliver advanced tools that put timely, relevant information at leaders’ fingertips so they can make decisions quickly. To address this need, banks should have the human-centered design capability required to understand customers’ needs and the sophistication to address them with solutions including artificial intelligence, application programming interfaces, blockchain and more.

In other words, our survey revealed that middle-market companies want their banks to do more than fund innovation in products or services. They are insisting that their banks be innovators themselves, actively harnessing emerging technologies to create products that companies can use to streamline their financial processes.

Capital One engaged Beresford Research, a market research firm, to conduct a phone survey of senior middle-market executives consisting of 26 questions covering such issues as disruption, innovation, financial technology and recruitment and retention. For purposes of the study, middle-market companies were defined as firms with operations in the U.S. with annual revenues between $100 million and $3 billion. The 300 responses represent the U.S. middle-market population with a margin of error of 5.65 points (at 95% confidence).

After a brief break, the second session commenced with representatives from each of the host organizations participating in a panel titled “Association and Media Leaders: What to Expect in 2019!” Led by Linda McDonough, president of 50 Words, NYIC’s Harvey Gross, CFA’s Richard Gumbrecht, TMA’s Scott Stuart and ABF Journal’s new owner Lisa Rafter fielded questions from both McDonough and the audience, covering topics such as association updates and new initiatives as well as the ways such organizations can use traditional and social media to get their message out to the wider industry.

Finally, the third session served as an appropriate bookend to the day, as the summit once again examined “Views from the Bench,” its annual panel of legal and judicial experts, including the Honorable Eric Frank, the Honorable Kevin Gross, Sean Beach of Young Conaway Sargatt & Taylor and Mark Minuti of Saul Ewing Arnstein & Lehr, all moderated by Mark Indelicato. Judge Carey also made his second appearance at the summit as part of the panel after his participation in Jeopardy earlier in the day. The panelists used hypothetical case studies as a jumping off point to cover the different issues confronted in a bankruptcy courtroom and the potential outcomes that could arise from them.

After three very full sessions, summit attendees finally had a chance to unwind at the closing cocktail reception, giving them a chance to get to know one another a bit better and network with other members of the bankruptcy and turnaround sectors.