When charting a course through bankruptcy, retailers must prioritize maintaining sufficient liquidity to fund operations and the expenses associated with the case. To accomplish this, retailers typically use a lender’s cash collateral and obtain debtor-in-possession financing. Both are critically important tools which allow the retailer to purchase new inventory to restock store shelves, pay employees and signal to vendors and other stakeholders the retailer has the financial resources to fund a turnaround and exit from bankruptcy as a viable enterprise.

Section 364 of the U.S. Bankruptcy Code governs DIP financing and is designed to facilitate debtor financing while balancing the interests of lenders, unsecured creditors and other parties. Section 364 provides a list of options, depending upon the debtor’s financing needs and the incentives necessary to entice lenders, including:

Prepetition lenders are a frequent source of DIP financing to retail debtors. They do so, in part, to protect their position against possible priming liens — a practice known as defensive DIP financing. Most retail debtors seek an ABL DIP facility to maintain continuity with most retailers’ prepetition credit facility structure.

Retail debtors may seek additional liquidity through a first-in, last-out (FILO) tranche in these ABL facilities, which provides enhanced liquidity through an additional loan based on the incremental asset value above the ABL lending limits. The FILO lenders advance their loan proceeds first, before the ABL lenders, but are paid after the ABL loans. Bon-Ton’s recent DIP facility included a $600 million ABL facility with a borrowing base comprised of inventory, credit card receivables and real estate, among other assets, and a $125 million FILO facility based on a portion of the value of the ABL assets exceeding the borrowing base limits.

Recently, retail debtors are employing multidraw term loans, which are drawn in increments upon achievement of certain milestones and carry reduced interest costs over time as a result of lower funded indebtedness. For instance, Payless obtained an $80 million DIP term loan, which included an initial $30 million draw upon entry of the final DIP order and $50 million to be drawn for the period following the disclosure statement order through the effective date of the plan of reorganization.

Increasingly, retailers face rising costs and unique challenges to complete a successful reorganization, including the time period to assume or reject leases under §365(d) and the grant of administrative priority classification with respect to all goods received by the debtor within 20 days of the petition date under §503(b) (9). They are forced to make decisions about the direction of their bankruptcy cases before filing and conserve as much cash as possible or risk liquidation.

Within this framework, many recent retail debtors have begun bankruptcy proceedings to implement a planned, and often prenegotiated, balance sheet restructuring and quickly exit from bankruptcy. The compressed timelines force debtors to be more aware of the immediate need for exit financing and, in some cases, obtain committed exit financing before filing. For example, Remington Outdoor filed for bankruptcy on April 3, 2018 with an ABL DIP facility, which converted to exit financing.

A retailer’s short ride through Chapter 11 has also caused companies to reconsider the need for traditional DIP financing entirely. Southeastern Grocers commenced a prepackaged bankruptcy proceeding on March 27, 2018, without traditional DIP financing. Instead, the company intends to fund its balance sheet restructuring through a combination of cash collateral and extended credit terms from its largest supplier, which will provide approximately $100 million in additional liquidity and a bridge to the company’s $1.125 billion committed exit financing in place as of the petition date. This approach relieves the debtor of interest, fees and other costs associated with a traditional DIP credit facility. Figure 1 summarizes recent DIP credit facility structures. 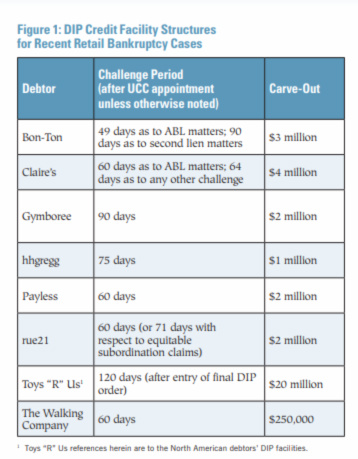 Use of Proceeds, Roll-Ups

DIP facilities are frequently used by retail debtors to refinance prepetition debt through a roll-up. Here, DIP loan proceeds are applied to satisfy prepetition debt and convert it to post-petition debt. Prepetition lenders which provide DIP loans view roll-ups as a critical protection because the lender receives a superpriority administrative expense claim, which is cramdown-proof because all administrative expense claims must be paid in full in cash on the effective date of the plan pursuant to §1129(a)(9). Thus, the DIP lender cannot be forced to receive less than what it is owed.

Roll-ups are frequently subject to attack based on three arguments: 1) they upset the priority scheme of the Bankruptcy Code by potentially converting undersecured prepetition debt into priority post-petition debt which could be secured by new collateral; 2) they come with increased court protections and 3) they provide the DIP lenders with additional leverage at the expense of other creditors.

Almost all retail DIP facilities include all assets collateral packages, with limited exceptions. For prepetition lenders, providing the DIP facility offers an opportunity to shore up their collateral position by obtaining liens on previously unencumbered assets which may have been excluded from the initial deal, such as specified real estate. Additionally, the DIP lender may obtain liens on avoidance actions and/or proceeds of avoidance actions.

Interest rates on recent retail DIP credit facilities have generally ranged from 250 to 450 basis points over LIBOR for revolvers and from 500 basis points over LIBOR to a fixed rate of up to 12% for new money term loans. Closing fees associated with DIP facilities come in a variety of forms and are not always disclosed in DIP motions and orders. Figure 2 summarizes the interest rates and fees from recent retail cases. 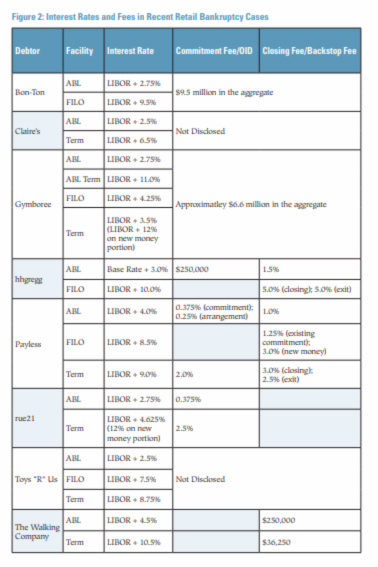 Retailers, as a matter of survival, often seek a quick exit from bankruptcy so DIP facilities routinely include short maturities and aggressive deadlines to accomplish milestones. Retail DIP facility terms are as short as four months and are rarely longer than 12 months. Milestones may vary, but many are structured around the 120-day or, as extended pursuant to §365(d) of the Bankruptcy Code, 210-day period to assume or reject leases.

Working backward from this 210-day marker, many lenders require a 90-day cushion in the milestones if the collateral must be liquidated. Thus, a retail debtor must determine a path to exit shortly after filing and may simultaneously pursue a sale and plan of reorganization rather than experiment with various operational changes under bankruptcy protection. Figure 3 includes maturities and significant milestones for several recent retail cases.

Retail DIP facilities are rarely governed by extensive financial covenants. Instead, they rely on an excess availability covenant in some ABL DIP facilities and, more generally, on a variance covenant requiring the debtor to meet certain cash receipts and disbursements targets, subject to permitted variances, pursuant to a weekly budget approved by the DIP lenders. As shown in Figure 4, permitted variances of 10% to 20% are common. 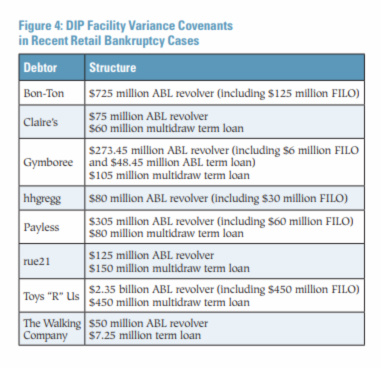 While debtors are expected to stipulate to the validity, perfection and priority of the prepetition lenders’ liens and claims in exchange for those lenders providing DIP financing, the unsecured creditors’ committee (UCC) retains the right to object to these matters.

A UCC’s attack on the prepetition liens may be a source of recovery for unsecured creditors if those liens are invalid or have not been properly perfected. The parameters of this challenge period are set forth in the DIP financing order.

Further, DIP lenders are expected to allow, as an exception to the DIP lenders’ priming lien, a carve-out for professional fees for the debtors and UCC. The carve-out is typically capped following an event of default under the DIP credit agreement. Figure 5 summarizes the challenge periods and post-default carve-outs established in recent retail bankruptcy cases. 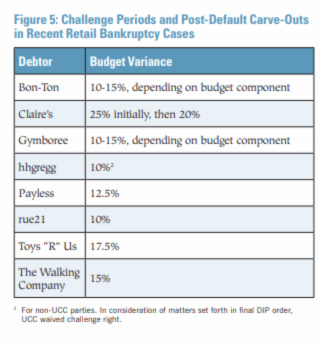 The retail DIP financing market remains robust and well established, yet every DIP facility is unique based on the particular retailer’s needs, the lender’s requirements, the UCC’s concerns and the court’s opinions. Given the headwinds in the industry, retail will remain a prime source for DIP financing opportunities.

This article is reprinted with permission from the June 2018 issue of the Journal of Corporate Renewal, published by the Turnaround Management Association.