Chapter 11 serves a vital role in the U.S. economy by providing businesses with an opportunity for a fresh start by restructuring their debts and operations or achieving an orderly liquidation. Total Chapter 11 filings have been steady at around 7,000 cases for each of the last four years.1 However, filings are now less than half as high as their most recent annual peak in 2009 (See Exhibit 1). 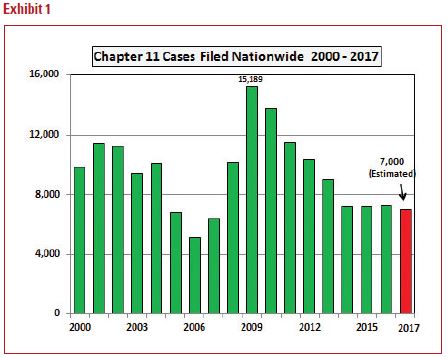 Although most Chapter 11 filings involve relatively small entities, a number of very large cases are filed each year, and 2017 was no exception. In the first 11 months of 2017, there were 17 Chapter 11 filings by publicly held companies with more than $1 billion in pre-petition assets. This was below levels from 2015 and 2016 but a little above the typical annual volume from 2011 through 2014.

For the third consecutive year, filings by oil and gas companies were higher than in any other sector. In the early 2000s, the largest filings tended to be by companies in the health care, retail and telecommunications industries. Banking and finance and automotive cases were highest during and after the Great Recession.

There were an unusually large number of filings by retailers during 2017, especially during the first half of the year. In particular, retailers of clothing for teens and children accounted for many filings. Although total sales volume continues to show healthy annual increases, competition from online retailers has squeezed some brick and mortar retailers.

Chapter 11 debtors have considerable leeway in which venue to file their case. For a number of years, two judicial districts — the District of Delaware and the Southern District of New York — have received nearly 60% of the largest cases (See Exhibit 2).

Over the last few years, the Richmond Division of the Eastern District of Virginia has emerged as a potential rival to the District of Delaware and the Southern District of New York as another preferred venue for the largest cases. Only a handful of large Chapter 11 cases had been filed in Richmond prior to 2015, the most significant of which was A.H. Robins (Dalkon Shield) in 1985.

In late October, President Donald Trump signed the “Additional Supplemental Appropriations for Disaster Relief Requirements Act, 2017” into law. This legislation has two provisions affecting bankruptcy. First, it extends 14 temporary judgeships that were due to expire (five of which are in the District of Delaware) for five years, and second, it provides four additional temporary judgeships (including two for Delaware).

The new law also made the bankruptcy process more expensive for some Chapter 11 debtors. It allows for substantial increases in the quarterly fee payable to the U.S. Trustee by Chapter 11 debtors whose disbursements equal or exceed $1 million in a quarter, in years in which the balance in the U.S. Trustee System Fund is less than $200 million. Due to the decline in filings since 2010, the balance of this fund is now below $200 million, so quarterly fees are expected to increase in early 2018. Although these fees will be unaffected in a majority of Chapter 11 cases, for cases with quarterly disbursements of $1 million or more the fee will be 1% of disbursements, up to a maximum of $250,000 per case per quarter.

An increasing number of pension plans, both public and private, are underfunded. The amounts set aside to pay benefits are far below actual obligations. The problem continues to grow as the ratio of retirees to workers increases. The pension crisis could cause ripple effects throughout the economy, perhaps even leading to the next financial collapse, which could result in dramatically higher Chapter 11 filing levels.

Many experts are predicting increased bankruptcy activity in the health care sector. Regulatory changes, lower revenue growth rates, increasing bad debt losses, competition from urgent-care centers and reduced payments to some providers under the ACA have all been cited as factors adding to financial stress throughout the industry.

As part of the expected overhaul of the Dodd-Frank Act of 2010, Congress may consider changes with respect to the financial restructuring of banking and investment institutions posing a substantial and systemic risk. Longer-term reform of Chapter 11, the treatment of student loan debt and consumer bankruptcies as a result of medical expenses may receive legislative scrutiny in the coming years. The ABI has created a Commission on Consumer Bankruptcy,2 which plans to release a report and recommendations in December 2018.

Supreme Court
The Supreme Court is asked to review between 7,000 and 8,000 cases each year, but generally only accepts about 80 cases for hearing. Three bankruptcy cases were decided in 2017:

The following three cases have been granted certiorari for the 2017-2018 term: