The American Apparel Show: A Rollercoaster Ride Through Bankruptcy and Back Again 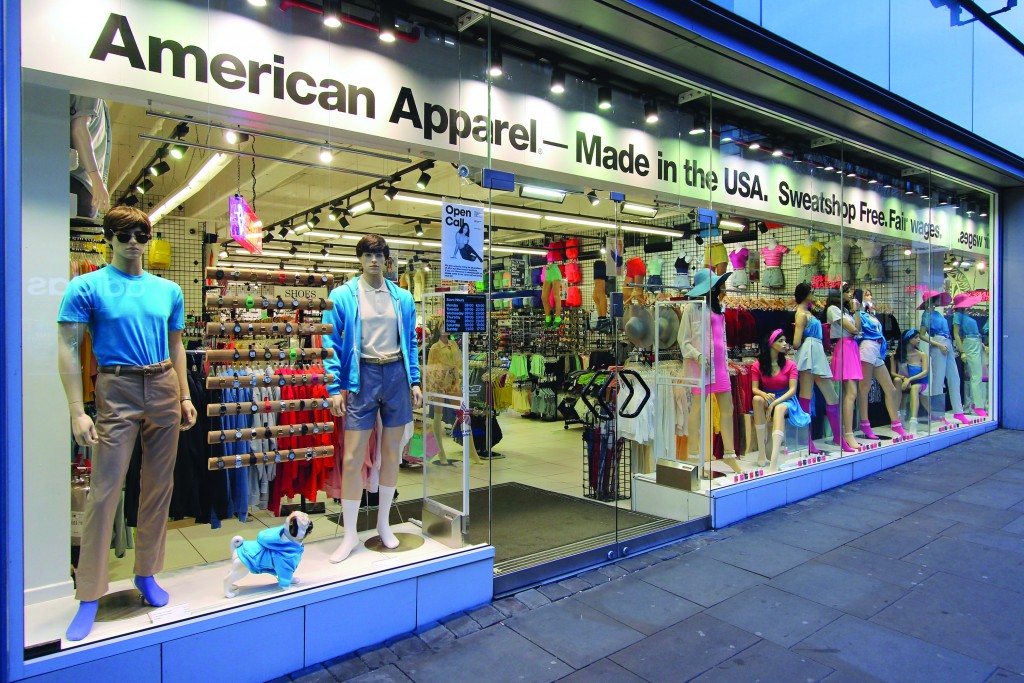 The retail graveyard is littered with iconic names — Gimbels, Woolworths, Marshall Fields. But if you were going to make a Netflix mini-series about the drama of the modern retail business, the meteoric rise and subsequent fall of American Apparel has all the key ingredients: sex, clothes, money and a bad-boy anti-hero at the helm. The company even has an unexpected rescuer providing DIP financing as it takes its second, and perhaps final, trip into Chapter 11 — new kid on the block Encina Business Finance.

Whether American Apparel will join the ghosts of retail stores past is still up in the air, leaving room for more exciting episodes.
Our story begins in an unlikely space: Founder Dov Charney’s college dorm room. Even before starting college, the Montreal native was infatuated with Hanes cotton T-shirts, socks and underwear. He would drive across the border to purchase them and bring them back to sell to his Canadian friends. He expanded his cross-border sales while studying at Tufts University outside of Boston and officially launched American Apparel in 1988.

From Sales to Manufacturing

Charney switched sides when he learned Hanes and Fruit of the Loom had moved their factories offshore. Convinced it was still possible to produce garments in the U.S., he dropped out of college in the early ‘90s and moved to South Carolina, then one of the nation’s textile manufacturing hubs, to learn the T-shirt business.

In 1997, he relocated to Los Angeles, where he paired up with a team of Korean garment workers to produce simple T-shirts. Unlike the boxy Hanes shirts of his youth, Charney designed a fitted shirt of a softer, more pliable material. For the first five years, American Apparel was a wholesaler providing shirts to companies that added artwork and distributed them.

According to a 2004 New York Times Sunday Magazine article, the business changed in the summer of 2003, when Charney rented a storefront gallery in LA’s Echo Park neighborhood for a friend’s photo exhibit. As an afterthought, he put some T-shirts out for sale. When he discovered that the shirts had rung up $1,500 in sales, he began signing leases in the hip neighborhoods of other cities. American Apparel opened its first retail store that year. At its peak, the company had 273 stores around the world.

Ironically, American Apparel entered the world of brick and mortar just as internet shopping was beginning, but no one imagined how it would completely change the way people shopped.

In addition to creating provocative ads, Charney honed the brand by continuing to manufacture in Central LA while most clothing makers were moving to Asia for cheap labor. He insisted he could be more nimble and fill orders quicker from LA than overseas. The company also promoted its anti-sweatshop ethos. Charney paid his workers on a performance-related basis, with some earning twice the minimum wage. He offered English classes, low-cost healthcare packages and subsidized meals to employees at his factory.

His vertical approach — American Apparel controlled everything from the fabric dyes to the stores themselves — proved profitable. His team production process enabled the company to manufacture more shirts in less time. In 2007, the Economist reported the company had an 80% gross margin, compared to the industry standard of 60%.

That year the company went public, just in time for the Great Recession.

American Apparel suffered from the recession like everyone else, but the biggest blow came in 2009 when an immigration services raid scooped up about 1,800 employees, making it impossible to fill orders and keep production schedules.

Charney’s quirky personality also took a toll on the company’s bottom line. In 2004, the now-defunct magazine, Jane, ran an article alleging that he had engaged in inappropriate sexual behavior with the reporter during their interview. At first, the bad behavior only enhanced the brand’s image.
However, later charges from employees about sexual harassment and a hostile workplace environment proved costly (the charges were either dismissed or settled out of court). The situation inside the business office also deteriorated. The company’s accounting firm, Deloitte and Touche, resigned in July 2011, citing a lack of internal control over financial reporting. The Department of Justice and the Securities and Exchange Commission initiated investigations into the company, and its stock plummeted from its IPO high of $15 a share to 78 cents.

Although the company was delisted in 2014, it managed to receive funding from FiveTCapital, a Swiss asset management company. In June 2014, the board ousted Charney as chair and formed a new board without him. Charney teamed up with hedge fund Standard General to purchase 43% of the company stock and plot a return. But the relationship soured, and Standard General shut Charney out while retaining its share in the company (at the same time, it had become owner of another bankrupt legacy retailor, RadioShack).

Meanwhile, in a competitive market with internet sales on the rise and in-store sales sagging, the company failed to make a profit under new CEO Paula Schneider and filed Chapter 11 for the first time in October 2015. For Charney, the January 2015 bankruptcy court proceedings offered another opportunity to wrest control from the board. Hagen Capital Group and Silver Creek Capital offered $300 million to purchase the company and restore Charney as CEO.

Instead, Judge Brendan L. Shannon approved an alternate plan presented by the bond holders that eliminated $200 million in debt and handed control of the company to a group of creditors, including Monarch Alternative Capital, Coliseum Capital, Standard General, Pentwater Capital Management and Goldman Sachs Asset Management.

The plan allowed American Apparel to exit Chapter 11 in February 2016 — only six months after filing. Encina was not yet open for business, and current Senior Managing Director Bill Kearney was still with CIT when American Apparel approached CIT for assistance.

“We could not do it,” Kearney says. “ Nor could any of the other bank ABL shops. They went ahead with the exit, and the stockholders provided some financing for them. After the exit, they went after some lenders to get a revolver.”

By that time, Kearney had left CIT for Encina Business Credit, which was on the lookout for these “messy deals,” as Encina CEO Marty Battaglia told ABF Journal in an interview. Encina submitted a proposal for $30 million in financing and won the deal.

“The facility that they were looking for in the spring was really just exit financing that they didn’t get when they exited in February. So technically, it was not exit financing because they had already completed bankruptcy,” Kearney explains. Encina completed its due diligence, but the deal never closed.

Then, on October 25, 2016 American Apparel came back on the wings of Houlihan Lokey, the investment bank the company hired when it planned to reenter Chapter 11. Encina was asked to submit another proposal, which was easier this time around since Kearney’s team had already completed the due diligence.

“That happens pretty often in this space,” Kearney says. “A deal comes along, and it doesn’t go through — but a few months later, it comes back.”
Encina received approval by November 4, about a week after the company received the request. American Apparel filed Chapter 11 for the second time on November 14.

Kearney said the company did not draw anything at closing. “Over the next weeks and months, we will fund administrative claims, working capital needs and expenses,” Kearney predicts. Canadian underwear manufacturer Gildan made a $66 million stalking horse bid to purchase the clothing brands, the inventory and possibly the factories in November, so Kearney was confident that the loan would be repaid. At the January auction, both Amazon and Forever21 emerged as competing bidders, but Gildan took the prize with an $88 million bid. The Canadian company is not interested in the 110 retail stores, and the future of the Los Angeles operations are uncertain. More than 3,000 employees were laid off.

Kearney declines to speculate on the reasons behind American Apparel’s rollercoaster trips into Chapter 11. In December, Marc Weinstein, the chief restructuring officer, told the Los Angeles Times that the company’s turnaround plan had failed. “The company faced unfavorable market conditions that were more persistent and widespread than the debtors anticipated when they emerged from the first bankruptcy,” he told the reporter.

He also told Bloomberg that CEO Schneider had dialed back the racy marketing, which may have had a negative impact on sales. Without the provocative branding, American Apparel appeared to be just another underwear company. Schneider left the company in September.

Gildan’s spokesman told the Times that the company would like to continue manufacturing in the U.S., but not necessarily in LA. The two companies also have conflicting brand images. While American Apparel’s advertising featured half-dressed models in compromising positions, Gildan recently engaged wholesome Grammy-winning singer Blake Shelton to do a TV commercial for underwear — fully clothed.

Charney has not totally given up. He insists that the company failed because he was forced out. He is suing American Apparel and Standard General. At the same time, he has started a second act with a new factory in South Central LA. He hired 40 workers, who still get minimum wage or more, and once again he’s shipping wholesale T-shirts and underwear. He is courting investors, and in September, he told Forbes he had obtained a $10 million ABL facility. He has a new website called “That’s Los Angeles by Dov Charney” featuring photos of South Central LA and an opportunity to sign up for an email list.

Stay tuned for the next episode!