At $10.2 billion, middle market sponsored volume fell 12% from the second quarter, though it remains up from the $8.2 billion issued in the first quarter (1). From a cumulative standpoint, sponsored volume continues to fall short of 2015’s run rate: year-to-date volume stands at $30 billion, a 19% decline from the comparable period last year (see Figure 1). 2016 may now shape up to be the slowest for sponsored lending since 2009. 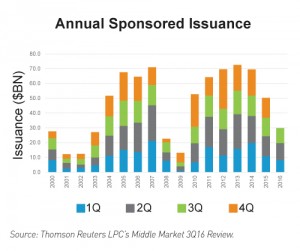 We believe a number of factors have been driving current market conditions. Geopolitical uncertainty, including the aftermath of Brexit and the upcoming presidential election, has led many investors to hit pause on new investments (2). In addition, valuation multiples remain at high levels. While updated third quarter multiples have yet to be released, results from the second quarter show how heated competition has become. For instance, the lower end of the middle market (under $25 million in enterprise value), which has seen increased interest as sponsors widen their sourcing strategies, reached a median EV/EBITDA multiple of 6.1x, approaching an all-time high (see Figure 2) (3). 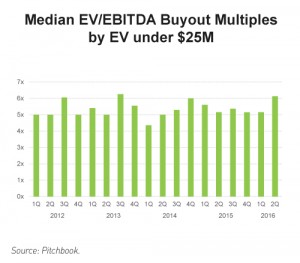 In our view, the overabundance of liquidity chasing too few deals remains an ongoing factor exacerbating the supply/demand imbalance. Yet in spite of supply constraints, there is mounting evidence that some investors may be prepared to allocate even more capital to private debt — especially direct lending. As the credit cycle continues to mature, some investors may be adopting more defensive postures: Historically, middle market loans have experienced fewer defaults and have had a higher rate of recovery compared to broadly syndicated loans (4).

Perhaps reflecting this notion, nearly 60% of the private debt investor respondents in Preqin’s H2/16 Investor Outlook Survey expected to invest additional funds into direct lending in the next 12 months (5). That forecast comes in a year when middle market loan fundraising — which stands at $24.5 billion in capital raised to date — has already eclipsed 2015’s total of $22.4 billion (6).

Looking ahead, we expect the usual seasonal pickup in activity and forecast a moderate increase for the fourth quarter. Yet, rather than wait for the market to solidify, some creative alternative lenders are choosing to innovate. For instance, some lenders are making a concerted outreach to non-traditional players like family offices looking for direct exposure rather than investing through a private equity sponsored vehicle (7). On the other hand, Fifth Street, in addition to supporting deals from existing sponsor relationships, is exploring other avenues, including deals in the venture space with targets that have significant enterprise value and positive EBITDA.

Borrowers Have the Upper Hand

With the supply/demand imbalance and market uncertainty lingering, we believe conditions currently favor borrowers. For instance, as competition heats up among middle market lenders, we have seen documentation requirements growing more relaxed.

While lenders generally regard “covenant-lite” as anathema in the middle market, other aggressive terms have begun to emerge. In particular, “covenant-loose” structures have surfaced that impose a leverage test, but with such wide parameters that the borrower has a greater chance of defaulting on payment before actually failing the test (8). We see these most pronounced on deals with higher yields and believe the trade-off between pricing and terms is likely to persist; however, Fifth Street is generally avoiding such structures and continues to maintain underwriting discipline when deploying capital.

Regarding pricing, middle market average new-issue yields fell significantly last quarter to 6.09%, compared to 6.90% in Q2 and 7.10% in Q1 (9). Select lenders emphasizing quality are having an even more challenging time finding attractive yields. This late in the credit cycle, we believe emphasizing first lien debt and focusing on defensive industries seems prudent; however, the spread differential between first and second lien middle market term loans stands at over 500 basis points (6). The silver lining, as we discuss later, is that borrowing conditions are favorable for alternative lenders looking to improve their capital structures, in our view.

Despite the more borrower friendly environment, investors generally seem to have erred on the side of caution and some are pushing back when riskier credits are involved (10). Unlike last quarter when 62% of first lien middle market term loans flexed down, in the third quarter flex activity overall was much more subdued. Moreover, only 7% of term loans flexed down versus 13% that flexed higher (Figure 3) (1). 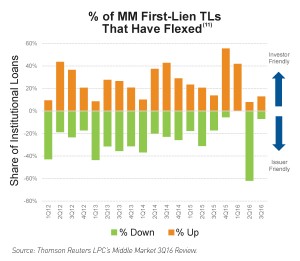 Fortunately, the surge of refinancings in the larger leveraged loan market during the third quarter did not surface to the same degree in the middle market (1). Over half of total leveraged loan issuance in the broadly-syndicated space was comprised of refinancings and repricings, as persistently low interest rates and robust investor demand allowed companies to cut costs and reduce debt through new borrowings (12). While we believe this wave is likely to continue until mergers and acquisitions and LBO activity gain momentum, the middle market has so far bucked the trend. Approximately 70% of middle market sponsored issuance can be attributed to new money volume in 2016 — a pattern that continued to hold during the third quarter (1).

Nevertheless, we continue to adopt a selective approach when it comes to dividend recapitalizations. In many cases, we are an incumbent lender, which allows us to operate from a position of strength, choosing the ones that we believe prove mutually beneficial. To help mitigate the downside risk that re-leveraging portfolio companies may lead to, we continue to advocate for a conservative approach that emphasizes quality deals with leading sponsors.

Within the alternative lending landscape, one segment has experienced a recent rally: BDCs. The Wells Fargo Business Development Company Index has surged 20% year to date — its best performance since 2012 (13).

We believe benign broader equity market conditions have certainly played a role. However, other forces are also strengthening BDC valuations, in our view. Dividend reductions, investors seeking yield and stabilization in the price of oil are key contributors (14), but we also believe the prospect of floating rates is resonating more with investors. While the Federal Reserve didn’t raise rates in September, it hovers on the precipice of another rate hike likely by year end, with Bloomberg calculating the market’s expectation of a rate hike in December at 64% (15). Some investors in search of yield may be proactively positioning as the case strengthens.

Notably, after remaining fixed for the past eight years, U.S. leveraged loans are getting closer to floating again. That is because LIBOR floors, which were initially designed to protect investors during the credit crisis and have typically been structured at 100 basis points in recent years, will dissipate when LIBOR crosses the threshold of 1%. Once LIBOR exceeds the floor, interest rates will again be tied to the benchmark, positioning lenders for higher distributions and possibly piquing investor interest even further. On October 24, 2016, the three-month LIBOR rate was 0.88.

DISCLAIMER: Statements included herein about the middle market lending environment are based on observations made by Fifth Street deal professionals.
Some of the statements included herein constitute “forward-­looking statements” within the meaning of the Private Securities Litigation Reform Act of 1995, which relate to future events and/or Fifth Street Asset Management Inc.’s (“Fifth Street”) future performance or ﬁnancial condition. Words such as “believes,” “expects,” “seeks,” “plans,” “should,” “estimates,” “project,” and “intend” indicate forward-looking statements. These statements are based on certain assumptions about future events or conditions and involve a number of risks and uncertainties. These statements are not guarantees of future performance, condition or results. Actual results may differ materially from those in the forward-looking statements as a result of a number of factors, including those described from time to time in our ﬁlings with the SEC.