The Seventh Annual Education & Networking Conference was held at the Villanova University Conference Center on March 27, 2014, under the auspices of ABF Journal, the NY Institute of Credit, and the Philadelphia Chapters of TMA and CFA, with more than 80 judges, lenders, factors, attorneys, consultants and others in attendance. This was the largest Villanova conference to date, with a sell-out crowd of active participants.

A full afternoon of programs was provided, beginning with a rousing lunchtime game of “Judicial Jeopardy,” featuring bankruptcy judges from the Districts of New Jersey and Pennsylvania. Bankruptcy Judge Michael B. Kaplan of the District of New Jersey played the Alex Trebek role. The contestants included Judges Christine M. Gravelle and Judith H. Wizmur of the District of New Jersey and Chief Judge Eric L. Frank of the Eastern District of Pennsylvania. Contestants were peppered with difficult questions on American history, especially about bankruptcy, such as, “These two Supreme Court justices, separated by 44 years between their terms, are the only two justices to share a name,” (Answer: Who are John Marshall Harlan [1877-1911] and John Marshall Harlan [1955-1971]), and “The best charioteer couldn’t save this movie company from bankruptcy in 2010,” (Answer: Who is Metro-Goldwyn-Mayer, Inc. [MGM]). 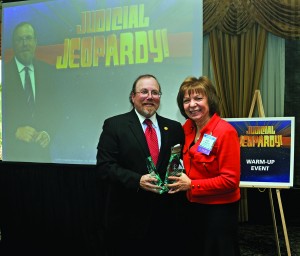 Judge Judith H. Wizmur clearly led the field with her encyclopedic knowledge of American history — bankruptcy-related and otherwise. Her electronic responder broadcast “Judge Wizmur” in sonorous tones with a response to nearly every question, before anyone else could think of the answer.

Following lunch, a panel of experts on “Restructuring – What’s New is Getting Old” led a discussion on UCC Article 9 sales, Assignments for the Benefit of Creditors (ABCs), Compositions, Prepacks and other restructuring alternatives. Moderated by Rob Katz, managing director at Executive Sounding Board Associates in Philadelphia, the panel included Jeffrey C. Hampton, co-chair of the Bankruptcy and Restructuring Department at the Saul Ewing law firm in Philadelphia; Terry Kohler, director at SSG Capital Advisors in West Conshohocken, PA; John R. Buck, managing director of Transactional Development at Versa Capital Management in Philadelphia; and Patrick A. McGovern, senior vice president of the Credit Resolution Group of Wells Fargo Bank in Philadelphia. 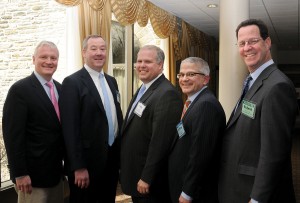 The panel discussed whether true Chapter 11 reorganizations still exist, the frequency and limitations of §363 sales in bankruptcy, how creditors’ committees are functioning these days, the outlook for restructurings in 2014/2015, and the key differentiators for “standing out in the crowd” among competitors. The panel observed that bankruptcy filings are far reduced from previous years, apparently owing to the recovering economy and cleaned-up loan portfolios, but also an increased disinclination among stakeholders to utilize bankruptcy vs. other restructuring alternatives.

Using bankruptcy just to gain access to a sale under §363 continues to be a popular method to “cauterize” assets, i.e., cleanse them of successor liabilities. There are a large number of potential debt buyers available through which lenders can monetize their assets, which has affected the relative attractiveness of going through a restructuring instead. In fact, there is a superabundance of funds available to purchase distressed debt as well as to make distressed investments, disfavoring restructuring for the time being. 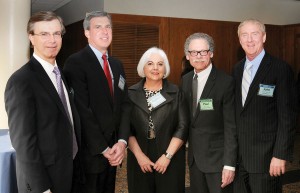 Petro commented on lending to specialty commercial finance companies and small asset-based lenders, as well as factors and equipment finance companies. DePledge focused on international asset-based lending and serving the domestic subsidiaries of international customers, and the variety of banking products provided to them. Coiley spoke about the significance of healthcare legislation on his customer base and the specialized reimbursement issues this legislation creates. Bushey talked about the regional middle-market asset-based lending business, and the non-traditional customer base that his bank’s clientele includes.

Specific deal examples of each type were discussed in terms of their strengths and weaknesses, and how easy or difficult they were to get completed. Petro commented that Wells Fargo was previously alone in providing leverage to finance companies, whereas now there are currently other players in the marketplace. She provided an overview of four recent transactions, including one in which Wells Fargo financed the acquisition by a BDC entering the specialty commercial finance space. She described the regulatory incentives for BDCs, including pending legislation to ease limitations on leverage, as well as increased regulation that may reduce the percentage of banks in this sector.

Coiley remarked that the healthcare accounts for 18% of the country’s GDP, and is projected to increase to 20% by 2022. The recently enacted Affordable Care Act’s focus on increasing the number of insured lives should expand the payor base, and from a macro viewpoint, should result in an expanding loan market in the future. He added that since healthcare is a heavily regulated industry, healthcare lending involves key risks, such as the possibility of government action that can alter reimbursement of providers with the “stroke of the pen.”

DePledge summarized two representative international transactions, and in general discussed Citibank’s comparative advantage when it comes to serving foreign companies doing business in this country, as well as domestic companies with foreign subsidiaries, vendors and customers. Bushey discussed the cyclical nature of real estate-related businesses such as construction and building products. As Santander is active in New Jersey and New York, among other regions, he discussed some of the issues created by Hurricane Sandy in terms of collateral and profitability. 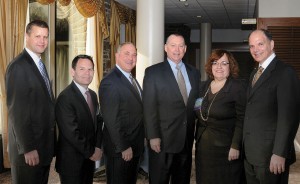 The conference’s final session was moderated by Mark S. Indelicato, a partner at the Hahn & Hessen law firm in New York City, and provided “Views from the Bench — Insights from Bankruptcy Judges and Leading Bankruptcy Attorneys.” Panel participants included Chief Judge Kevin Gross and Judge Kevin J. Carey from the District of Delaware; Judge Rosemary Gambardella of the District of New Jersey; and Wilmington attorneys Sean M. Beach, a partner at Young, Conaway, Stargatt & Taylor and Mark Minuti, a partner at Saul Ewing. The panel focused on important legal issues affecting lenders, such as whether lenders have the right to “credit bid” their liens in a bankruptcy proceeding. Recent court decisions were discussed, including Philadelphia Newspapers, Belingham and Fisker, which appear to limit what had long been treated as an absolute right of lienholders to credit bid their lien values in full.

Howard Brod Brownstein is a Certified Turnaround Professional, the president of The Brownstein Corp. and a contributing editor of ABF Journal. He can be reached at Howard@BrownsteinCorp.com.