Leaders of organizations at every level deal with change every day, and most are adept at managing and communicating through them. The trouble starts when leaders try to apply those same strategies from routine change to “Big Change.” Big Change is often triggered by a disruptive event such as a merger or acquisition, outside investment such as private equity, new leadership, a new product launch or new market entry. It is transformational, driven by new vision and direction, and comes with heightened expectations of performance and growth for the organization.

For leaders, these are often once-in-a-lifetime opportunities that will make or break them, their organizations and their brands. But for employees, these opportunities are often overshadowed by fear and concern. The introduction of a new leader can lead to fear of reorganizations and job losses, departments/offices/plants closing, or changes in culture and policies.

Getting all employees to understand and take aligned action on a Big Change strategy is an enormous undertaking. Big Change puts into motion a set of actions that behave much like a starburst. Channeled properly, this energy can propel the organization forward quickly — motivating and aligning the organization, strengthening the brand, sparking innovation, accelerating growth and creating new business opportunities. But if not properly directed, it can become a pathway to “organizational swirl” — simultaneous inefficient, counterproductive efforts from individuals and groups due to confusion, information gaps, misalignment and unclear priorities.

Step 1. Leaders spend months in preparation and planning (e.g., due diligence in a merger), then are quick to communicate the strategy to the organization with the assumption that employees will embrace the plan and enthusiastically take action. They expect progress against goals will be swift. But this is rarely the outcome.

Step 2. Employees react with mixtures of confusion, skepticism, worry, resentment and indifference. Many don’t, won’t or can’t take action, in part because they are unclear on what action is required.

Step 3. Beset with stalled progress, costly missteps and lost opportunities, frustration arises at every level. Fingers are pointed between leaders and employees with leaders asserting, “We already told them,” “What’s the problem with them?” and “Why aren’t they just doing X, Y or Z?”

Step 4. Frustrated, leaders react with waves of similar communications in the belief that more is the solution to the problem.

Step 5. The cycle painfully repeats itself. By then, it’s often too late.

Step 6. The business ends up missing its goals and joins the ranks of those who have contributed to these sobering statistics:

When leaders make preparations for how to best communicate a Big Change, they don’t always appreciate the magnitude of what is about to befall their organization and brand. Consider the recent Forbes study, which reports that 70 % of employees can’t identify their company’s strategy — even in normal times. If the majority of employees can’t identify their company’s strategy during a normal time, what percentage would you expect understand it during a Big Change?

For more than a decade, we have worked with dozens of mid-market and Fortune 500 leaders and their companies to help them use Big Change to transform their businesses and brands. We found four root causes that lead to failure:

Root Cause #1: An Incomplete Strategy — Communicating a Big Change strategy to an organization before it has been fully developed and articulated is problematic. This occurs because leaders can usually visualize the full strategy as soon as the foundational elements are defined, and don’t see the need to fully address the details. This ability to work with partial information and connect the dots on-the-fly is called business acumen, and it’s something all leaders should have. However, employees who will implement the strategy don’t always have the same depth of business acumen. They can’t sift through partial information sets and connect the dots. Or they don’t have access to all the specifics to make the same connections. And even if they do, there’s no guarantee they will connect them in the way leadership would want. Employees need clarity and completeness. They need to understand not only the “what” and “when” of the strategy, but also the “why.”

Root Cause #2: The Illusion of Agreement — When developing a Big Change strategy, leadership will collect and assess information, explore options, and discuss the options and choices so they can reach consensus and make final decisions. Even so, it’s not uncommon for those instrumental in creating the strategy to have trouble articulating it in a clear, consistent and compelling manner. Ask each member of the leadership team to explain it, and you’ll find troubling inconsistencies, not unlike the old parable of blind men describing an elephant differently based on where they are standing. No one is consciously in disagreement. They are simply interpreting abstractions and nuances of a complex strategy through their own point of view. Leaders miss or ignore this fact because of their higher level of business insight and their motivation to be in agreement with each other so they can begin implementing their plans. When business and communication strategies are developed simultaneously, the communications strategist can make sure the leadership team is not only in alignment, but also is communicating a consistent message when the strategy is rolled out. This ensures employees hear a consistent and aligned message when the strategy is rolled out. 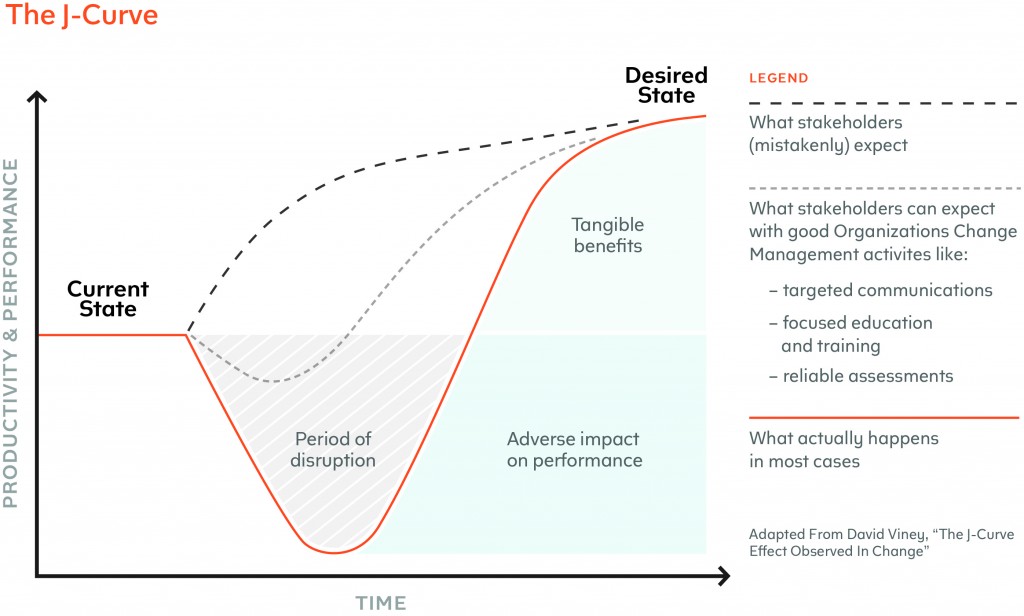 Root Cause #3: Leaders out of Sync with Their Audiences — During the months of preparing and planning for Big Change, the leadership team has ample time to intellectually and emotionally process and embrace the new strategy. Afterward, unaware that they completed this journey, the team communicates its Big Change strategy as though everyone in the organization went through the same process. They can’t comprehend when employees don’t immediately understand and embrace the strategy. However, leaders’ expectations are unrealistic, as demonstrated by a model called the J-Curve, used by USC social psychologist Dr. Jerry Jellison, which reflects the way change impacts an organization’s performance during times of change and the organization’s perception of it. What this chart doesn’t tell you (but Jellison does in his book, Managing the Dynamics of Change) is that every stakeholder in the company will traverse the J-Curve at a different rate, and those leading the change will be ahead of everyone else. It’s the responsibility of leaders to recognize what employees are thinking and feeling at every stage of the J-curve to help the organization make the journey smoother and faster. Effective communication is critical to the success of a Big Change plan.

Root Cause #4: Non-Aligned Words & Actions — Even if the messaging and its execution are flawless, if the actions of company leaders do not align with what they are saying, or they fail to stand behind messages over time or across functional groups, employees will not believe and buy in. That’s because communication is more than words. Communication is the transmission of the total sum of the words, decisions, actions, attitudes, beliefs, values and character of the communicator. This includes the decisions leaders make and the priorities they set.

Following two fundamentals will help avoid organizational swirl and maximize the potential of a Big Change. First, communications planning should start as soon as leaders contemplate a Big Change trigger event. Second, it should be developed simultaneously with the Big Change strategy and employ scenario-based methods. Not only does this prepare leaders to communicate to employees and other stakeholders (e.g., investors, partners and customers), it makes the Big Change strategy stronger by exposing flaws and blind spots in the team’s thinking and the strategy itself.

Our experience has shown the critical importance of simultaneous business and communications strategies, and intentional communications during times of Big Change. The question is, given all the potential pitfalls and the payoff at stake, will leaders plan accordingly? Once Big Change is in motion, an organization’s success hinges on whether they took the right steps to prepare.

Bob Domenz is founder and CEO of Chicago-based Avenue Marketing (www.avenue-inc.com), a marketing strategy and activation firm that partners with B2B leaders to transform their businesses and brands, and launch new products. He can be reached at bdomenz@avenue-inc.com.