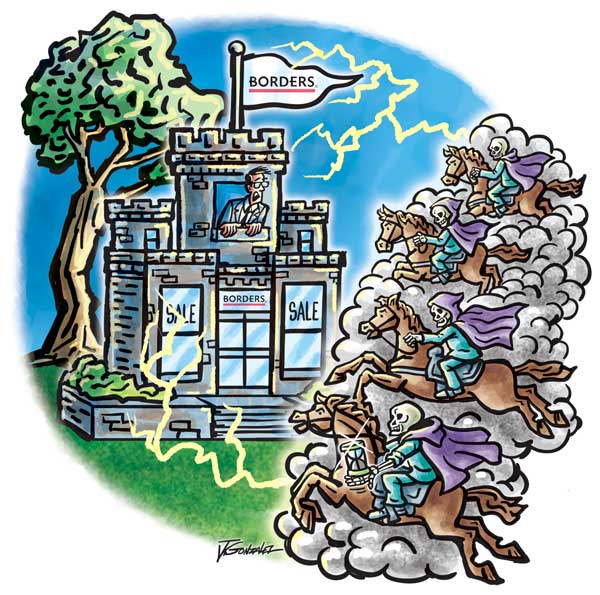 “Following the best efforts of all parties, we are saddened by this development. We were all working toward a different outcome, but the headwinds we have been facing for quite some time, including the rapidly changing book industry, eReader revolution and turbulent economy have brought us to where we are now.” Mike Edwards, Former Borders Group President, July 18, 2011.

For avid readers and music lovers alike, it’s a bit difficult to conceive of a world without Borders. But such is the case as we learned in mid July, when the once mighty retailer announced its grim fate had been sealed. What happened?

Ward Mooney, CEO of Boston-based Crystal Financial notes, “It’s interesting that the book industry had two major players — Borders and Barnes & Noble. This is very similar to the consumer electronics business a few years ago, which also had two major players in Best Buy and Circuit City.” Mooney notes the parallels between the two defunct (or in Borders’ case, soon-to-be defunct) retailers are eerily striking. He says, “ I think those two cases are fascinating. When Circuit City started to face very similar headwinds that Mike Edwards referred to, it went into a relatively rapid decline instead of being able to restructure and reorganize like many other retailers have been able to do. I find it surprising that retailers like Borders and Circuit City that were important to their constituencies — their vendors, landlords and customers — weren’t able to figure out a way to restructure and reduce their size to remain an important player in their respective businesses.”

And the end, as Mooney notes, came rather quickly. Were Edwards’ apocalyptic horsemen — a changing book industry, the eReader revolution and the turbulent economy — joined by a fourth? If so, was the fourth horseman time? Howard Brownstein, president of the turnaround firm Brownstein Corporation, thinks not. “Time wasn’t the issue… I think Borders had ample time to decide if it could reorganize, reject leases and take the other necessary steps to survive. I don’t think the system failed here.” Instead Brownstein sees it as an example of Darwinian economics. “I think we’ll see a recycling of assets like inventory and intellectual property assets — some will survive and others won’t.”