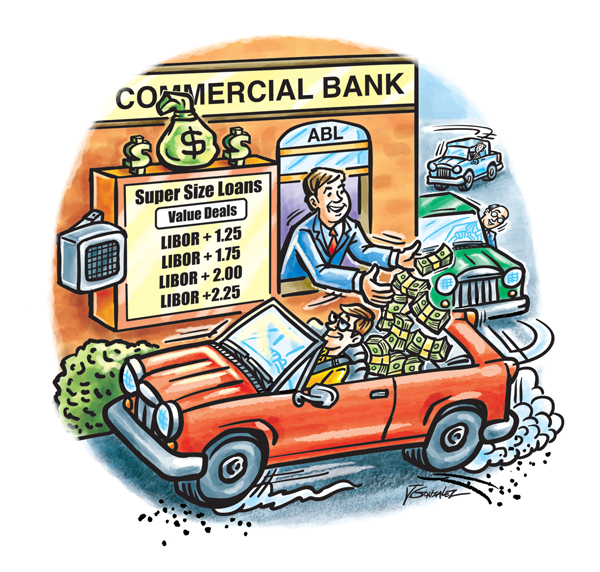 An article in The Wall Street Journal noted U.S. banks under pressure to boost their commercial lending activity have increased their participation in the asset-based loan market this year. This heightened activity has resulted in borrowers being able to complete deals more easily and less expensively. The article cited data gathered from Dealogic, which indicated that year-to-date, asset-based loans closed in 2011 have climbed to $87.8 billion, or 43%, as compared to the same period in 2010.

The article also noted that banks found their asset-based loan portfolios weathered the financial crisis particularly well and look to the ABL market as a low-risk approach to providing a much needed lift to their overall commercial lending activities. In fact, the WSJ writer asserted that banks often cited asset-based lending as a growth area in their second-quarter conference calls this year.

Bank mergers, such as those with Wells Fargo and Wachovia, PNC and National City, and Bank of America and LaSalle Bank, have resulted in larger ABL operations. In turn, these lenders are now more willing to finance larger pieces of syndicated deals. And stiffer competition has led to lower pricing on many transactions. In an interview that appeared in the May/June issue of ABF Journal, Walter Owens, head of the Commercial Banking division at TD Bank, noted, “We’re seeing banks take on out-sized pieces on their balance sheets, particularly in the ABL space … one thing I find curious is that after learning diversification was key in the downturn, I’m seeing lenders take on very big exposures. That’s something we’re not following.”

On the borrower side, some companies such as Sears, have been able to upsize their loans with relative ease. In April, lenders in the Sears deal took positions for as much as $400 million, well above historical hold positions of around $100 million.