While U.S. middle market loan volume registered a slight uptick this quarter, the market has yet to approach levels seen one year ago. Although sponsored issuance gathered momentum in Q2, increasing modestly to $11.9 billion, issuance for the first six months only reached $22 billion — the weakest first half in five years (See Figure 1).

At $1 trillion, M&A volume in the U.S. has reached historic levels in 2015(1); however, purchases by investment grade companies have overshadowed private equity purchases. On the other hand, the middle market represents a haven for private equity sponsors who are currently being outbid by cash-rich corporate buyers in the Broadly Syndicated Loan (BSL) space. Many sponsors believe middle market conditions are more favorable than the BSL space, partially due to the prevalence of alternative lenders who continue to fill the void left by traditional banks hampered by strict capital requirements and leveraged lending guidelines.

Healthcare Leads the Pack
Despite sluggish conditions in the first half of 2015, we remain cautiously optimistic for the second half, given the seasonality of the M&A market. Although middle market valuations remain frothy and liquidity excessive, we have noticed an increase in deal flow in select industry verticals such as healthcare. At $5.3 billion, healthcare represented the top sector by volume in the first half of the year (See Figure 2). This sector tends to exhibit lower leverage and improved economics when compared to other traditional sectors. We believe this dynamic exists because many lenders shy away from the complex reimbursement models which characterizes these credits and necessitates specialized origination and underwriting expertise. 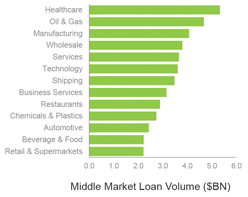 Pricing Squeeze Persists, While Middle Market Maintains Yield Premium
Driven by too much liquidity chasing too few deals and a slowly improving economy, pricing continues to show signs of downward pressure. During the second quarter of 2015, middle market term loan yields declined to 5.74%, with tightening occurring throughout the capital stack (See Figure 3). While first lien pricing responded more quickly and by the largest magnitude, second lien followed suit, albeit to a lesser extent.

Despite the decline, middle market spreads still maintained their premium over large corporate spreads, where term loan pricing fell to 4.66%. Through the first half of the year, the 100+ basis points yield differential has held fast. The premium was re-established after disappearing during the broader market sell-off at the end of 2014. This yield differential represents an attractive liquidity premium for middle market investors. Investors seem to agree, as evidenced by the brisk pace of middle market fundraising so far this year. At over $8 billion, 2015’s visible middle market capital raising appears on track to surpass levels reached last year(2).

Sizing Up the GE Exit
The landscape surrounding middle market leveraged lending continues to change, as evidenced by the sale of GE Capital’s sponsor finance business to the Canada Pension Plan Investment Board. There is considerable uncertainty surrounding the sale’s impact and, from our perspective, it seems premature to make a definitive assessment. With competition and liquidity both pervasive, the effects are unlikely to be immediate in our view.

We believe that the sale may be a harbinger of things to come, with more financial institutions exiting this space due to leveraged lending guidelines.

Middle Market CLOs Make Strides, But Still Have a Ways to Go
A flurry of last minute activity buoyed 6/30/15 YTD U.S. collateralized loan obligation (CLO) volume to $58.68 billion. BSL CLOs accounted for $55.32 billion, or 94% of total issuance, while middle market CLOs totaled $3.36 billion (or 6%) during the period. As Figure 5 below demonstrates, the CLO market has rebounded considerably from its post-financial crisis trough. However, much of that recovery has been driven by BSL CLOs, whose 2014 volume of over $116 billion actually exceeded pre-crisis peak levels. Demand for middle market CLOs has strengthened as well, but not nearly to the same extent. From our perspective, we believe demand will continue to increase as a result of attractive yields, more conservative structures and favorable correlation statistics to broader liquid market alternatives.

In addition, the broader macroeconomic environment and cyclical summer slowdown haven’t helped. Recent capital markets volatility has given investors pause as macroeconomic concerns ranging from a potential Greek exit to a slowdown in China have diminished investors’ appetite for risk. These uncertainties have caused liabilities to trend wider, particularly in the middle market, with recent quality issues pricing Aaa/AAAs north of L+195 basis points.

These pressures have pushed out the timeline for a variety of deals. However, as the typical summer slowdown concludes and some of the recent macro events subside, we expect the market to ‘find its footing,’ suggesting that the pace of fourth quarter activity should be brisk.

Given the current market environment, some investors appear ambivalent towards investing in credit at this juncture in the cycle. They appear conflicted around timing their entry, particularly if the cycle has reached an inflection point. However, we believe our defensive positioning and differentiated credit portfolio may help alleviate investors’ concerns. Fifth Street’s award-winning origination platform allows us to uncover pockets of opportunity, while maintaining strict underwriting standards and a focus on capital preservation. We have continued to focus on senior secured instruments and have limited our exposure to cyclical industries, including energy, consumer-driven businesses and companies with direct retail exposure. While our size, scale and deep sponsor relationships allow us to source ~1,000 middle market loan opportunities per year, our single most important job is making smart investments in relatively secure credits with appropriate risk-adjusted returns, which is evidenced by a selectivity ratio of ~4%(4).

(3) Copyright © 2015, S&P Capital IQ (and its affiliates, as applicable). Reproduction of this chart in any form is prohibited except with the prior written permission of S&P Capital IQ (“S&P”). None of S&P, its affiliates or their suppliers guarantee the accuracy, adequacy, completeness or availability of any information and is not responsible for any errors or omissions, regardless of the cause or for the results obtained from the use of such information. In no event shall S&P, its affiliates or any of their suppliers be liable for any damages, costs, expenses, legal fees, or losses (including lost income or lost profit and opportunity costs) in connection with any use of S&P information. I

DISCLAIMER: Statements included herein may constitute “forward-looking statements” within the meaning of the Private Securities Litigation Reform Act of 1995, which relate to future events and/or Fifth Street Asset Management Inc.’s (“Fifth Street”) future performance or financial condition. These statements are based on certain assumptions about future events or conditions and involve a number of risks and uncertainties. These statements are not guarantees of future performance, condition or results. Actual results may differ materially from those in the forward-looking statements as a result of a number of factors, including those described from time to time in our filings with the SEC.

This article is not intended to be an offer to sell, or the solicitation of an offer to purchase, any security (including Fifth Street Asset Management or its affiliates, Fifth Street Finance Corp. or Fifth Street Senior Floating Rate Corp.), the offer and/or sale of which can only be made by definitive offering documentation. Any other or solicitation with respect to any securities that may be issued by Fifth Street or its affiliates will be made only by means of definitive offering memoranda or prospectus (as applicable), which will be provided to prospective investors and will contain material information that is not set forth herein, including risk factors relating to any such investment.