The outlook for global container carriers in 2017 remains challenging as the industry continues to face the issues that have troubled it since the onset of the 2008 financial crisis. Events such as Brexit and the new U.S. administration’s policies have injected uncertainty into the future of global trade, but we remain cautiously optimistic. As we move into Q2/17, the small amount of hope remaining for the shipping industry is fading quickly, but there are solutions that could see faith restored in the industry.

In this testing environment, it is likely carriers will struggle to improve financial performance this year, but there are clear steps they can take to shore up balance sheets. By remaining focused on eliminating costs from their core shipping businesses and concentrating on the opportunity that the wave of consolidation sweeping the industry is putting in front of them, carriers should take advantage of every opportunity to save costs through effective post-merger integration and rationalizing the global fleet.

The shipping industry continues to seek ways to drive down costs in a bid to search for solutions to its financial woes. Carriers have already slimmed down operating expenses and reduced their capital expenditures, especially by delaying mega-vessel orders. The industry has slashed CAPEX by more than half in the past five years, bringing it down from $25.2 billion in 2011 to $12.4 billion in 2016.

However, despite their vast scale these efforts may not go far enough, as nearly every key financial indicator has worsened from the previous year. Operational cash flow as a percentage of revenue slowed to an anaemic 6% through the last 12-month period ended September 30, 2016. CAPEX still outstripped those cash flows despite the industry’s recent strides. Meanwhile, the industry’s total debt levels, driven by borrowing from mergers and acquisitions activity, have edged back up.

What’s more, the earnings before interest, taxes and depreciation (EBIT) margins turned negative in Q3/16 for the first time in recent history. About half of our study base reported a negative margin in the last 12-month period (Figure 1), which shows that these losses are not concentrated in just a few carriers. If we look back at Q3/16 results, they reveal little encouragement for the year ahead, especially as the industry usually sees peak volumes during that period.

These results, however, do not take into consideration the anticipated impact of the Hanjin bankruptcy. All financial indicators had foretold a bankruptcy was on the horizon, and it was a big one, in fact — it was the biggest one since United States Lines filed for bankruptcy in 1986. Hanjin filed for bankruptcy in South Korea in August and shortly thereafter filed for Chapter 15 protection in the U.S. Bankruptcy Court for the District of New Jersey, Newark, having struggled with mounting debt for some time. With a market share of 2.9% of total container capacity before the filing, its unravelling will likely have profound effects on the markets this year, with some already being felt in spot rates for the eastbound transpacific trade lane nearly doubling since the carrier declared bankruptcy. 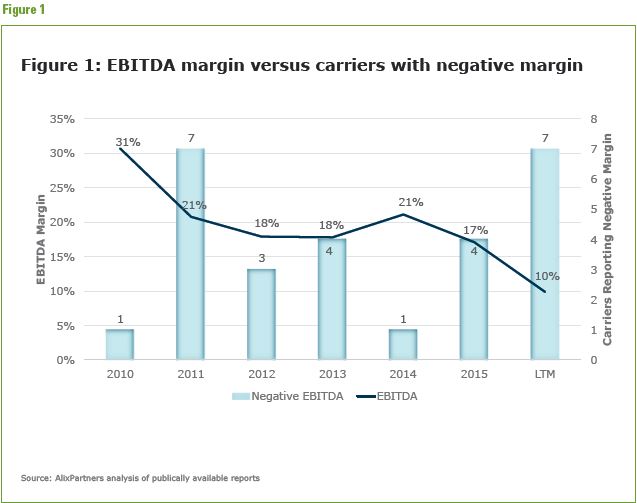 If we take into consideration the Altman Z-score, a formula for predicting the likelihood of bankruptcy based on several metrics from a company’s public financial statements, a score less than 1.81 suggests financial distress. With the industry’s average Z-score having fallen to the lowest level to date, a delicate 0.9 (Figure 2, next page), we can expect to see more financial distress in the industry. To further put things in perspective, we have not seen a score higher than 2.99, which is considered in the “safe zone,” since 2007. 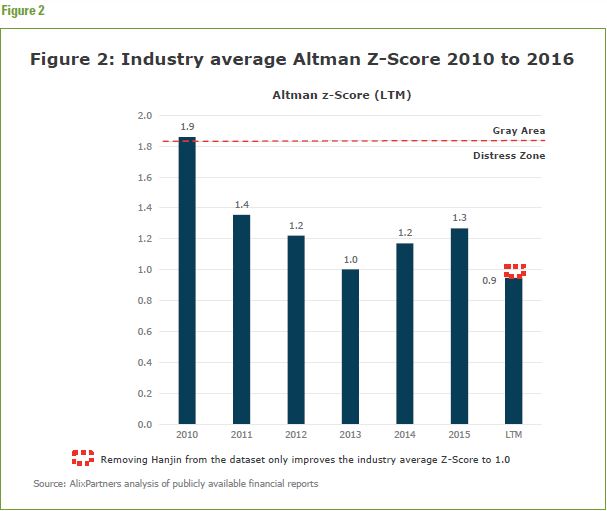 Even when Hanjin, which had a negative Z-score in the last 12-month period, is removed from the sample set, the industry average only edges up to 1.0, signalling that another bankruptcy is likely to happen soon. However, if carriers improve their financial results by maintaining higher rate levels and reducing costs throughout 2017, the industry could avoid further unravelling.

Consolidation in the Industry

For the foreseeable future, the global container shipping market will likely see overcapacity as a persistent problem. Industry consolidation, which has been largely ignored for the past decade, will play a critical role in the future. This is, however, only part of the solution.

The end of 2016 saw accelerated M&A activity in the industry, with three of the largest Japanese lines — Nippon Yusen Kabushiki Kaisha, Mitsui OSK Lines and Kawasaki Kisen Kaisha — all announcing plans to merge this year. A few weeks later, the European Commission approved the Hapag-Lloyd-UASC merger, followed by Maersk’s intentions to buy German shipping line Hamburg Sud. Those carriers that have yet to be involved in a merger or acquisition are persistently rumoured to be the next to do a deal. We are expecting to see continued consolidation as those small carriers that lack the financial firepower and scale to compete with the larger players struggle on their paths ahead.

However, this recent uplift in M&A activity has further complicated operational alliance partnerships, which were already dynamic and in the wake of the Hanjin bankruptcy suffering from a crisis of confidence. There are three major alliances we are expecting to see this spring — 2M, Ocean Alliance and THE Alliance — which will comprise 11 shipping operators and manage more than 70% of the container capacity on the Asia-to-Europe and transpacific routes this year.

Shifting alliances and the wave of M&A activity have infused more complexity and more confusion into an already tempestuous market. This outlook has the potential to grow increasingly foggy for shippers and ports if carriers go outside of their current alliance to merge. Increasing consolidation in the market may limit shippers’ choices but could, at the same time, widen their reach as more carriers become truly global.

As the reshuffling continues, shippers should carefully re-examine their procurement strategies to ensure supplier diversity. They need to use multiple alliances, and study the financials carefully, if they are to protect themselves from the disruption and chaos that a bankruptcy could potentially create.

Carriers have already started taking the initial steps to relieve their financial woes, including slashing CAPEX and OPEX and stepping up scrapping, but they still have some hard decisions to make. They need to continue to drive down costs through effective post-merger integration and fleet rationalization activities that can bring supply and demand back into balance.

At the beginning of the year, we were optimistic that 2017 could be the turning point that the industry urgently needed. However, as we steer the course of the year, our optimism has been dampened ever so slightly; it was critical that the carrier community maintain spot rate levels to shore up their finances, but these have slid in recent weeks and indications are that negotiated contract rates will not improve.

The industry desperately needs a change in the wind, but with financial indicators pointing to more bankruptcies and continued consolidation in the market, this seems unlikely. As we go further into 2017, the industry must focus on alleviating the pressures that have become so much more prevalent in recent years. If they were to do this, optimism in the industry will begin to grow.