Throughout 2016, my partners and I observed a few trends and dynamics that lenders should note as they consider how to best exit troubled loans in 2017.

Fiscal policy, exchange rates and trade policies will have significant impact on many businesses. As a lender, you cannot afford to ignore where in the world your borrower’s customers, competitors and suppliers are based. Monetary policy, uncertainty about U.S. stability and potential for growth and issues outside U.S. borders (like Brexit) all have an impact on relevant exchange rates. From mid-April through late-November 2016, the U.S. dollar had a strong run: up 7.7% against the Chinese yuan, 8% against the Canadian dollar and 10.4% against the euro.

As the currency markets swing, consider the impact this might have on your borrowers. Importers benefit from a strong dollar while exporters may find it challenging to compete and make money. The strong U.S. dollar can make it difficult to sell a business to a foreign entity, yet high tariffs may encourage foreign companies to buy U.S. operations. The law of unintended consequences looms large on the tariff issue. On the surface, tariffs would obviously help some domestic manufacturers compete, but would hurt the many U.S. companies that buy components from overseas manufacturers. President Donald Trump’s tariffs could lead to trade wars and high tariffs placed on your borrowers’ exports.

The aging population is another increasingly significant factor. Currently, more than 14% of our population is over 65 and that number is expected to explode in the coming years. To determine what this could mean for a business, first consider the customer base. Some companies, like pharmaceuticals, may benefit from an aging population. Other industries, like builders of large, high-end homes, may be hurt.

How will aging affect the company itself? Are any of the key members of the management team likely to retire during the term of your loan? How dependent is the borrower’s survival on an aging team? How much time do you likely have to exit safely if key employees retire or expire? Expect to see more retirements in 2017 than you’ve ever seen before. 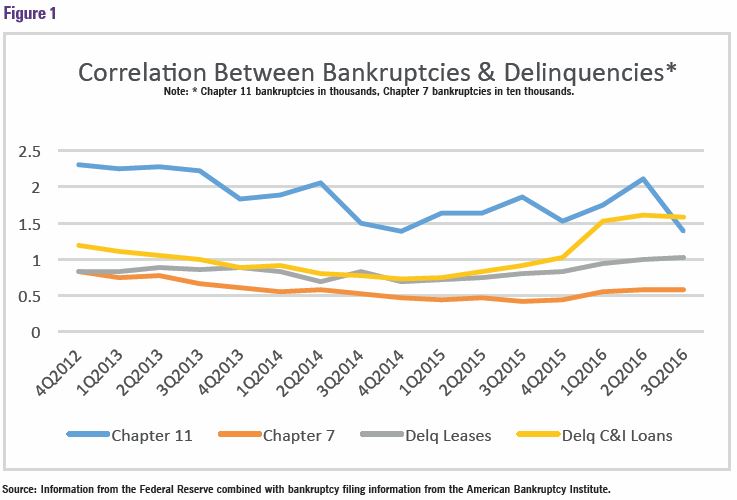 Several finance industry insiders report many lenders are ushering borrowers into bankruptcy or liquidation without considering a turnaround. According to the Federal Reserve, delinquency rates on leases and commercial and industrial (C&I) loans are up, respectively, from .69 and .72 in Q4/14 to 1.03 and 1.58 in Q3/16. Particularly on the C&I side, that’s a substantial jump. You might expect to see a proportionate uptick in Chapter 11 filings, perhaps with a few months’ lag.

Yet, the increase in business Chapter 11 and Chapter 7 filings during this period was modest, from 6,069 to 6,993. Furthermore, the number of Chapter 11 cases was essentially flat while the number of Chapter 7 cases grew by nearly 20%. As you can see in Figure 1, delinquencies and filings are highly correlated, but the two lines have recently intersected (delinquencies up and Chapter 11 filings down), while Chapter 7 filings are up a bit, indicating more liquidations per delinquency.

While this doesn’t provide a definitive confirmation of the perceived trend, this evidence leads us to suggest that lenders in troubled loans should look at the potential for a turnaround or a sale at the first signs of distress. All too often, value is lost while management tries to turn things around or sell the business without assistance from a professional. Before the company is out of runway and liquidation becomes the only option, the lender should encourage the borrower to try to fix the business or sell it as a going concern. Be persistent and make introductions to qualified professionals. In most cases, the recovery in a going concern sale will far exceed liquidation value, a truth that seems magnified coming into 2017.

We also noticed that the challenges associated with some appraisal and liquidation issues were exacerbated in 2016.

Lenders must pay attention to valuation concepts, such as the difference between orderly liquidation value (OLV) and fair market value (FMV), market changes since the last appraisal, the deterioration of equipment through the lack of maintenance and any sale or removal of appraised key equipment. With regard to the last issue, lenders must be aware that without the equipment, there is less to sell than was appraised. If the missing equipment includes key pieces, the draw for people to participate in the sale may severely decline.

Inventory mix is also critical. When selling solid countertop materials, for example, you need about three slabs to complete a kitchen. Therefore, two slabs of a given style have less value because a contractor can’t complete the average job with them. Styles change and inventory that hasn’t moved in the last 12 months is worth substantially less per piece. Therefore, the per piece value indicated in the appraisal can be vastly different from the average selling price in liquidation. Advances made on inventory loans should be made the same way appraisers might stratify the inventory in the appraisal, rather than on a blended rate.

Valuation definitions used in appraisals do not necessarily reflect the best metrics for predicting auction performance, which confounds auctioneers. There is no exacting discount that can accurately express the gap between a fair market in place value, or even an orderly liquidation, and the price achieved in a 100% sell-through in 60 days. This is especially true on projects without frequent valuation update and in sectors, like solar, with rapid technological obsolescence.

These specialized assets do not have the same liquidity floor of resellers, or easy comparable sales data as do, say, CNC metal cutting machines. Values can vary significantly on a deal by deal basis. As a result, even when lenders ask for forced liquidation value (FLV), appraised FLV often does not produce the same result as the reality of the auction. In late 2016, we observed a big breakdown in appraised FLV versus auction value in the current market. In the coming months, lenders should not make decisions that are based solely on appraised values without further investigation.

Ideally, you want the borrower to sell as a going concern, and values have been very good in this respect. After slipping a bit from their 2014 highs, multiples now appear to be back to those historical highs. According to Pitchbook’s 2016 Global PE Deal Multiples Report, released in December 2016, multiples, at least for private equity deals reported, are high (8.2 X EBITDA and 1.5 X revenue). As usual, the multiples experienced for smaller companies are much lower, but they are still attractive. It is important to note that most reported transactions had trailing 12 months (TTM) revenue growth and acquirers anticipating revenue growth in the next 12 months.

If you are looking at a distressed business, these multiples might not tell you much for two reasons:

Expect troubled deals to trade at far below median or mean pricing of healthy private equity (PE) transactions. According to the same Pitchbook report, about 40% of all reported PE deals required seller financing or earnouts. Few bankers are interested in earnouts, so in special situations, deals tend to be all cash, resulting in much higher leverage and a purchase price that will likely rely on asset values, versus multiples, leading to a substantially lower purchase price. All of that notwithstanding, going concern businesses, even storied ones, are in demand and attracting aggressive pricing, and an entirety sale should be pursued to avoid a liquidation.

While these issues aren’t new, it’s important to recognize them as they seem to be common, and they are magnified right now. Keep these concepts in mind as you use your usual tools and experience to get through workouts, and 2017 should be a very good year for you.