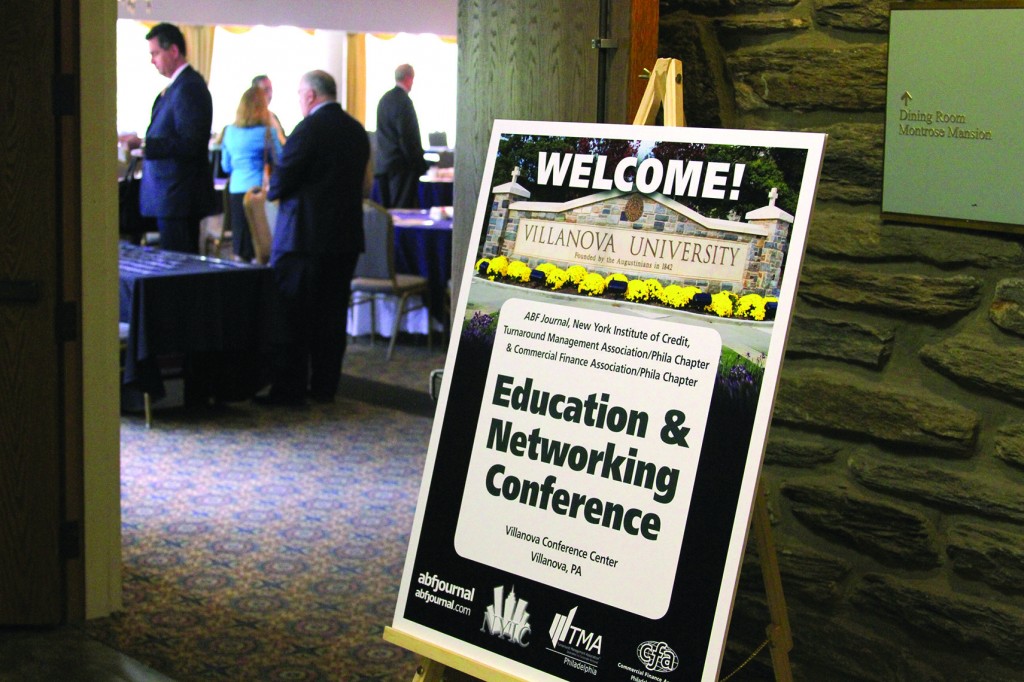 Once again, the Northeast top bankruptcy judges mingled with asset-based lenders, factors and turnaround professionals at the 9th Annual Villanova Networking and Education Conference on April 21. The conference, held at the Villanova University Conference Center, was co-sponsored by ABF Journal, the Philadelphia TMA and CFA Chapters and the New York Institute of Credit.

“This is a wonderful opportunity for people in a variety of sections of the ABL network to gather and share information,” said ABF Journal publisher Jerry Parrotto. “The bankruptcy judges are really generous with their time and actively participate.”

Indeed, the bankruptcy judges kicked off the event with a rousing round of Judicial Jeopardy. In this replica of the popular television game, Judge Michael Kaplan of the District of New Jersey admirably filled Alex Trebek’s shoes as the contestants — Judge Kevin Gross of the District of Delaware and Judges Andrew B. Altenburg, Jr. and Rosemary Gambardella of the District of New Jersey — competed to make timely responses in the form of a question. The “answers” challenged the competitors to identify items in the bankruptcy code, remember key players in the Watergate scandal and recall television theme songs of yesteryear. Returning champion Judge Altenburg took the crown along with Judge Carey.

Can Healthcare be Turned Around?

The only topic more prevalent than the upcoming presidential election is the state of healthcare. Even without the changes wrought by the Affordable Care Act, healthcare institutions — hospitals, clinics, homes for the aged — have been struggling to provide care for patients against a backdrop of lower reimbursals, from both government and insurers, and higher costs.

The conference’s first panel — Turnaround/Restructuring Healthcare 2016 and Beyond: What You Need to Know, Want to Know and Are Expected to Know to Survive, Prosper and Differentiate — was timely. Robert Katz, managing director of EisnerAmper moderated the panel that included Carol Irvine, president and CEO of The Madlyn and Leonard Abramson Center for Jewish Life; Teresa K.D. Currier, Saul Ewing partner; Mark Chesen, managing director of SSG Advisors and Jeffrey Joslin, Gemino Healthcare Finance vice president of Portfolio Management.

The panelists all agreed that today’s patients demand a higher quality of care, which creates challenges in the managed care environment. The cost of medications and equipment are rising. Expensive procedures, like MRI scans that were once used only to diagnose high-risk conditions, have become routine. On the other side, managed care providers are mainly interested in the bottom line.

The panelists agreed the biggest change, on a hospital level, was the transformation from a volume-based business to an emphasis on quality of care, in terms of reimbursal. Panelists also noted that hospitals can be penalized if patients return within 30 days of discharge. The healthcare industry has been ripe with mergers and acquisitions as institutions such as Jefferson, Temple and the University of Pennsylvania have absorbed many independent facilities. Independent providers are vanishing under the weight of increased regulations.

“Bankruptcy doesn’t necessarily smooth out the healthcare issues,” pointed out Currier. “Nuances of the healthcare system are such that you have to move carefully before filing bankruptcy.”

Katz, who was instrumental in the turnaround of the Lower Bucks Hospital, noted that there are often issues pertaining to public health and the availability of other providers if a hospital is forced to close. Irvine came to the Abramson Center during a time of major change. A legacy institution in the Jewish community, known for most of its 150-year history as Philadelphia Geriatric Center, the Abramson Center faced multiple economic and branding challenges when it sold its longtime home in 2000, moved to Horsham, PA and changed its name.

Because the Abramson Center is committed to supporting low-income seniors, 85% of its residents receive Medicaid — an amount cut back by the state in recent years. Under Irvine’s guidance, the center created profit-making programs, such as Care Advisors for home caregivers and short term rehab to subsidize the center’s charitable mission and supplement its fundraising.

All of the speakers pointed out that there are similar healthcare streams in other institutions that can be used to support less profitable but necessary programs.

Regulation and fintech are two of the issues that ABL lenders are dealing with today. Bushey pointed out that the underwriting process has not changed, but “the compliance side of the house is evolving. It’s the oversight, the compliance and the monitoring that puts pressure” on his lending team.

Mikalic joked that in factoring, “When the economy is good, we do well. When the economy is bad, we do better.” She said that her industry is not feeling pressure because of regulation, but from merchant cash advance (MCA) companies, who turn receivables into cash advances using online applications. Mikalic said the MCAs used to buy credit card advances in small amounts, but now they now give advances on receivables and pay out as much as $500,000.

Schuldiner recalled that when he left banking and moved to King Trade, he was relieved at the drop in paperwork. But he said that is changing. This makes the MCAs, which use online applications, attractive to borrowers. He predicted that regulation will be coming to the MCA world.

“I don’t think a lot of people understand what they are signing,” Schuldiner said of the borrowers. He said that there are times when he has paid off the MCA to get a borrower out of the loan.

Mikalic added that in Canada, a commission is set up to oversee fintech lenders.

Attorney Mark S. Indelicato, partner at Hahn and Hessen, served as moderator. The session began with a heated discussion about the Supreme Court’s ASARCO decision, a carryover from last year that has not yet been resolved. The court’s decision has a negative impact on the way attorneys are paid following a bankruptcy decision. Everyone agreed that more litigation will follow, along with further discussion at next year’s conference.

The panel presented a hypothetical case study involving a retailer with 200 stores filing for bankruptcy and the complications in the credit bidding process.

Judge Gambardella said she tells participants in a bidding case, “You can’t speak to one another at any break in these proceedings.”

Participants debated the difference between collaboration and collusion until the time for cocktails arrived, and the spirited conversation moved into the storied Montrose Mansion for a perfect ending to a day of education and networking.