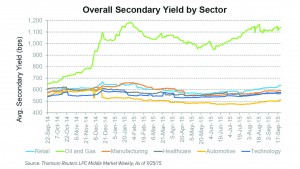 Banking on the Fourth Quarter

Despite disappointing middle market deal flow so far this year, lenders expect fourth quarter activity to be seasonally higher. With year-to-date volume trailing by roughly 30% versus the prior year, most middle market participants have experienced lackluster volumes in 2015.1 However, in our observation, select lenders (especially those with a direct origination platform) saw a pickup in activity heading into September.

Overall, the middle market still looks healthy as compared to the Broadly Syndicated Loan (BSL) space, which has succumbed to wider market volatility. Both middle market investor demand and appetite to finance new transactions show solid underpinnings. Additionally, pricing remains relatively stable compared to the BSL and high yield markets. This is due to the middle market’s ongoing supply/demand imbalance. Looking ahead, lenders anticipate an uptick in activity based on growing deal pipelines. Though they expect non-sponsored issuance to remain flat, lenders are counting on an increase in sponsored transactions (see chart on left), which to date have only reached $35.7 billion this year (versus $51.9 billion during the corresponding period in 2014).1

Within leveraged lending, sector performance diverged widely this quarter. The broad S&P Leveraged Loan Index was essentially flat, while the oil and gas sector retreated materially. Following HY, cracks have surfaced in the BSL space and, to a lesser extent, in the middle market. As we have maintained for some time, defaults in the energy sector will likely materialize as companies confront a refinancing wall. In our opinion, this realization has contributed to the sector’s most recent rise in yields, reaching 1,139 bps towards the end of September, as opposed to 653 bps at the same time last year (see chart next page). Higher yields may appear tempting — and at some point, opportunities will emerge — however, in our view, we have yet to reach the inflection point.

BSL: A Harbinger of Things to Come?

Sector rotation and a flight to quality continue to characterize the BSL space and echoes of these trends can be seen in the middle market as well. For instance, many lenders remain partial to first lien positions, seeking the relative safety provided by participating higher in the capital structure.

From our standpoint, these developments are not atypical, given the juncture in the credit cycle and the increased volatility buffeting the equity and high yield bond markets. However, the extreme volatility that flared in August has yet to spill over into the loan markets, let alone the middle market segment. Instead, the middle market remains more heavily influenced by competitive dynamics. Banks are still grappling with Basel III requirements and Leverage Lending Guidance (LLG). Plus, healthy competition by alternative lenders for high quality assets continues to fill the void as banks exit or reduce commitments.

On the whole, we believe the middle market is mostly stable. Pricing ticked up slightly after the August flash crash, but has since normalized. In general, terms and leverage have followed suit. That said, on the margin, for select credits with tier one sponsors and fortress balance sheets, we have seen a bit fuller leverage and slightly more borrower-friendly terms. For instance, pristine credits with attractive recurring revenue and greater than 50% equity checks have benefited from leverage in excess of 6x for one-stop or traditional first lien/second lien structures. We have also seen some select borrowers with this profile enjoy covenant-lite terms, despite being sub-$50 million credits. However, these remain the exception rather than the rule, as lenders are generally employing discipline — conditions we do not foresee changing in the fourth quarter.

Last quarter, the market was keenly focused on the sale of GE Capital’s sponsor finance business to the Canada Pension Plan Investment Board. While many speculated about the potential impact, from our perspective, it seemed too early for decisive conclusions. However, we did contend that the effects were unlikely to be immediate. Three months later, we have seen Antares Capital resurface under the auspices of the Canada Pension Plan. Though our paths have only crossed a few times, on the surface, the new entity appears to be a disciplined competitor in terms of both pricing and size.

U.S. middle market Collateralized Loan Obligation (CLO) issuance has been relatively consistent throughout the year, although volume has recently begun to taper off. Year-to-date, primary volume is just over $5.0 billion, representing 6.4% of total U.S. issuance of $78.3 billion, which compares favorably to just 5.2% of total issuance over the same period in 2014.2

Yet the story dominating the CLO headlines is not centered on volume. Instead, as we noted last quarter, CLO managers have been focused on dimensioning the impact of the new U.S. and European risk retention rules that will soon take effect.

In our view, the new rules will change the market dramatically. Structurally, a market that once had low barriers to entry will shift to one where substantial capital is required.

We believe that senior floating rate funds stand to benefit the most from these rule changes over the course of the next year. We also anticipate seeing higher yields, which are currently depressed due to CLO buyer demand. In particular, funds with locked in liabilities and considerable capital to invest appear optimally positioned.

Even if CLO managers are able to untangle the complexities of implementation, we expect the cost of capital to rise dramatically. As a result, CLO fees should climb, albeit most likely at a lag. Foresighted managers with diverse platforms are exploring a number of ways to capitalize on the dislocation when it unfolds. Those who already participate in the market will undoubtedly look to leverage the advantage that proprietary insights bring.